skip to main | skip to sidebar

So I get to see one of my best friends this weekend. I'm so effing excited. That's where my subject comes from. We used to call each other that all the time. We were insane back in the day. We probably still are, we've just calmed it down so it isn't so much in the open. But when we get together, it's always insane. I've really got to get a picture of our "found art" project we did in high school on here. It freaked out even our craziest friends.

The store I'm at has one door that works and one that doesn't. There's a paper on the one that doesn't work that says "please use other door" or something like that. I've watched like 5 people walk into it today. Can they really not read? Seriously! It's pretty funny. That's all my ill brain can come up with today.
Posted by cutelilVictoria at 3:15 PM No comments:

oh look at that, my butt just hung up on you...

There are just some customers I would love to walk up to the bullet proof glass and just casually say, "Sorry, we're having technical difficulties. Please try again." Or "Error" Or "the person you are trying to reach is unavailable, please hang up and try again." or make the crackly noise like you're losing the signal. That would be so funny. Yes, I get kicks and giggles out of the most random things. That's how I roll.

Grey's Anatomy was on last night. It was combined with Private Practice. I absolutely love those two shows. They were both really good too. One guy had "worms" aka parasitic cysts in his brain. It was insane and I was disturbed on so many levels but I couldn't stop watching. It's like if you ever come across a corpse, you just stand there starring and even though you have the urge to vomit, you can't look away. It's why people slow down to look at car wrecks. You aren't intentionally looking to see if somebody died, but you don't want to miss it if they did. Human nature is a weird and disturbing thing sometimes.

One day, I will walk around for 24 consecutive hours with Pringles sticking out my mouth quacking like a duck. That would be fantabulistic! And it would really freak out all the customers. I love when they think I'm psychotic. It shows them that they shouldn't mess with me or I'm liable to go ape shit on their asses. Speaking of asses, last night I watched the funniest South Park. They were making fun of when everybody was obsessing about the Catholic priests molesting children and Cartman said he could stick food up his ass and crap it out his mouth. It worked and everyone started copying him. So all the people would be in the middle of saying something and they'd crap out their mouths and keep talking. Too funny!
Posted by cutelilVictoria at 12:08 PM No comments:

I got to go on a nice little trip this weekend. I love St. George. If they had a better school and better job opportunities I would so be living there.
I left Friday when I got off work at 7. I didn't get to Cedar til like 10:30. I woke Niki up and we played Littlest Pet Shop or some weird looking animal toy game. Then we read together for a little while. I woke up the next morning to Taci saying "Auntie's sleeping" while pointing to me. She's so freakin cute when she says obvious things! I only care that she can talk. I don't care what she says. Jess took them to a friend's at 10 when she had to go to work. And I left for St. George. Kitty did my hair. She dyed it brown and cut it into a lob which I think stands for long bob. I just know it's cute and I like it. So here's some pictures.
This one shows off the pretty color: 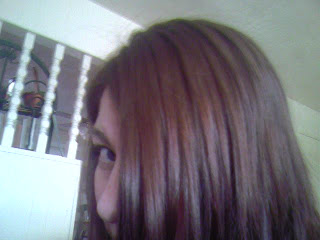 This one shows it from the front. There's lots of layers so I can flip it up and make it all prettiful: 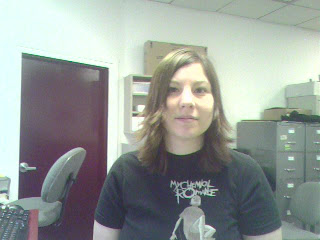 This one shows the back view of all the pretty layers: 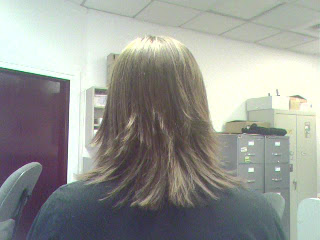 So after I finished getting my hair done I went to the mall for my sister cuz she had a gift certificate for Bath & Body Works. I got her some smelly stuff and I even got one for myself. I'm really liking it. Then I called my old boss, Rick. We had dinner with his girlfriend, Laurie, who's an absolute sweetie, and his daughter and her husband. We had Ernesto's. I had a #5 which is enchiladas. I had the cheese ones. They were delish! And they weren't too spicy so I didn't get heartburn or sick to my stomach. Always an accomplishment, that one. So I spent the night at Laurie's house and went and ate breakfast with Rick. At about 1 I headed back to Cedar so I could spend more time with the girls. We played Barbies and Littlest Pet Shop and even a game of Phase 10. I won again. I would really hate for Niki to beat me. Taci even played a couple of rounds of the game. Ok, she played with the cards and I actually played for her. But it was fun all the same. When I went to leave Niki kept hugging me like she didn't want me to go. I'm surprised I didn't cry. I usually cry when I leave them. But for the first 100 miles of the drive back home I was trying my best not to puke all over my car. That distracted me from the pain of leaving the girls. Migraines suck. My advice would be to never try to drive 250 miles while fighting a raging migraine.

Anyway. While looking for a title for this blog I came across this quote from South Park and it had me giggling like a school girl so I thought I'd put it in here.

[addressing the damned]
Hell Director: Hello, newcomers and welcome. Can everybody hear me? Hello? [taps microphone]
Hell Director: Can everybody... ok. Um, I am the Hell Director. Uh, it looks like we have 8,615 of you newbies today. And for those of you who were a little confused, uh, you are dead; and this is Hell. So abandon all hope and yadda-yadda-yadda. Uh, we are now going to start the orientation process which will last about...
Protestant: Hey, wait a minute. I shouldn't be here, I was a totally strict and devout Protestant. I thought we went to heaven.
Hell Director: Yes, well, I'm afraid you are wrong.
Soldier: I was a practicing Jehovah's Witness.
Hell Director: Uh, you picked the wrong religion as well.
Man from Crowd: Well who was right? Who gets in to Heaven?
Hell Director: I'm afraid it was the Mormons. Yes, the Mormons were the correct answer.
The Damned: Awwww...
Posted by cutelilVictoria at 5:07 PM No comments:

Books To Be Read